Get fresh music recommendations delivered to your inbox every Friday.
We've updated our Terms of Use. You can review the changes here.

Take Me Away EP 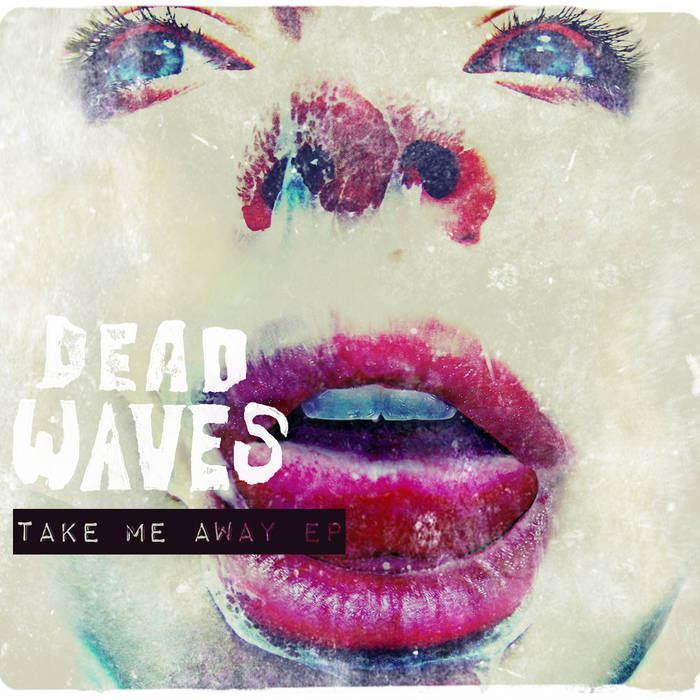 “New York three-piece indie rock outfit Dead Waves like things loud, kinetic and more than a tad bit angry […] Dense, searing guitar licks and pounding percussion highlight the band’s resolute determination in exploring brotherly affection, as well as their own disillusionment with the world around them.  It’s this dichotomy of hopefulness and hostility that keeps them from ever feeling musically staid or barren.  And on their latest collection of songs, the Take Me Away EP, Dead Waves really flesh out these split musical personalities and find the center of their own layered aesthetic.
The band’s latest single, “Over Me,” finds the trio running a gauntlet of thick, viscous guitar riffs, jackknife drumming, and Panapoulos’ feral vocals. The tracks sounds as though it has more in common with 80′s rock juggernauts The Pixies, GbV, and grunge icons Nirvana than it does with any clear-cut modern indie rock group.  Everything is shaded slightly dark here, with a wealth of fuzz added to the guitars and reverb dripping from the lyrics.  But even with the song sounding as though it was recorded at the bottom of a well — at the bottom of the sea – it still has enough sting that you’ll not likely forget its resounding melodies and cacophonous wash of sound any time soon.  Further blurring the line between the past and present, inspiration and original thought, Dead Waves want you to feel their music in your marrow.  And just give it a second, you’ll feel it soon enough...” - Joshua Pickard, BEATS PER MINUTE

"This Brooklyn noise-rock trio, consisting of brothers Nick and Teddy Panopoulos and drummer Franz Streit, come across as slightly schizoid on their premier EP, but I don’t mean that as an insult. There’s a classic “heavy vs. noisy” dichotomy going on with their sound throughout the course of the record, and it’s quite clear that these guys could go either way on any given song and pull it off with ease. They have conquered both realms and they seem to write songs with one or the other in mind.
The core of a song either derives from heaviness or noise. The DIY sound of “Planet of Tribes” is a rip-snorting, throat-shredding example of screamy 90s noise-rock, pushing things well into overdrive and topping it off with some blaring vocals that are sheer fucking madness. At first, it reminded me a little bit of the underrated Modey Lemon, and maybe Falcon Crest (anybody heard of them?). They dial the noise way down with “Over Me,” and go slow and heavy, changing lanes completely and sounding like a different band. “Which Way” goes sci-fi psychobilly, and then they rev up the noise again on “Instead,” and end up resembling the great Steel Pole Bath Tub. The dank and grungy “Anomaly” is sort of Nirvana-esque as it rides in on a three-note bass line and lumbers around the room like a giant. They ultimately lean more in the direction of a noise band, but with no rulebook in hand, as opposed to, say, an actual heavy metal band going noisy. There’s a controlled chaos in their noisy moments (“Planet of Tribes”) that you just don’t get from heavy metal with its strict rhythms and structuralist tendencies. The binding is looser. When they’re bounding around the room really bashing out the noise it’s pretty damn groovy. There ain’t a plethora of bands that I can say that about right now. Refreshing. A dark horse contender for the best records of the year list." Anthony Mark Happel, BLACK ORCHID/IMPOSE MAGAZINE

“We never die,” repeats singer Teddy Panopoulos who, along with his brother/guitarist Nick and drummer Fabien Streit, offer a respite for none in their teeth-kickng, six-track Take Me Away EP. Queens NY trio Dead Waves are full of surprises; the gates open with “Planet of Tribes” and the gambit is an ambush, a treacherous assaulting wash of electric guitar, dinned percussion and Teddy’s growling lyric-blender voice.
Jarring the mindless subway platform ice-breaker, “I see the train coming.” Teddy’s words are simplistic, agitated and deliver with “fuck you” retribution - every song aiming to break through an apathetic wall of banal routine. Each song yanks the listener in a different direction, one moment will flash the muddy Melvins, the following a textured youthful disillusion like the Thermals and the Bronx. Dead Waves forge variation; amid the dissolved grandiosity, rock-defiant guitar solos pierce and pull the listener through the cataclysmic din (“Over Me” and “Big Fish”). Drums simplify then reignite, words soften then boil back.
“Instead” takes bold swings, going from a Dead Kenneys-like “Pull MY Strings” washed groove, into hard wallowing vectors, Teddy punching away, “I never shut down for you.” - Christopher Petro, PERFORMER MAGAZINE

“This New York based trio is considered indie-rock by some, but sound much more feral here, more true to the post grunge, noise, post hardcore label. The hazy, almost trancy music is like a mist pervading the landscape. The vocals are a monster lurking just beyond the border of your site and the edge of the mist waiting to lunge at your jugular…The record definitely has a certain feel; it has you in a surreal mood all the way…I get more and more into this EP the more I listen.” - Steve Stevenson, DAGGER ZINE

“Ah, Nirvana, took grunge to the masses, destroyed hair metal, spawned a thousand shit bands and produced a body of work that range from the awesome to the less than ordinary, however, early on the best of their music was melodic, angry and fueled by a drive and passion that is seldom equalled.  Why do I write this?, you ask, because I am listening to Dead Waves, a three-piece New York band whose latest EP contains six songs that seem to conjure up the spirit of early Nirvana like no other I have heard. Raw in production, the collection kicks of in a huge wave of energy as “Planet of Tribes” rushes out of the speakers and engulfs you, taking you back to the first time you heard “Bleach”. Over the next 14 minutes the intensity rarely lets up as the band crank everything up and go for it until “Big Fish” shoves you out the other side, exhausted but smiling.” - TERRASCOPE UK

"Are you feeling particularly aggressive today? Are you fed up with people and the world in general? Great news! So are Dead Waves, the delightfully screamy NYC-based trio, and they’ve just released their new “Take Me Away” EP on Bandcamp! “Take Me Away” opens with “Planet of Tribes,” a rabble-rousing track that makes you feel like you’re getting stomped on in the middle of a mosh pit, before settling down for “Over Me,” that has a gritty, grungy feel.  ”Over Me” would make Kurt Cobain proud, crunchy guitars nearly overpowering downer lyrics.  Following “Over Me” is “Instead,” a Melvins-inspired tune with distorted guitars reminiscent of early Riot Grrrl tracks, ala “Rebel Girl” by Bikini Kill. “Anomaly” and “Which Way” both scream Dead Kennedys, and will leave you reeling and out of breath. Lastly, “Big Fish” alternates between roaring guitars that enhance it’s aggressive chorus and soft verses for the thinker in  you. Overall, Dead Waves succeed in bringing back the glory days of grunge, and are well on their way to being stars." - JAMSPREADER

"This Queens-based trio fleshes out their penchant for abrasive melodies via six songs of fuzz-blasted caterwauling with a nod to early Pixies…Pre-Nevermind with a psych-bent…the album has a mite of no-wave, even post-hardcore in its veins…its great moments are undeniable” – Dylan Chadwick, SLUG MAGAZINE

“Lifting up our heads, boosting morale, and breaking ear drums are NYC's Dead Waves…Bringing you the first listen to their just released Take Me Away EP the Brooklyn three piece brings together Teddy Panopoulos with his brother and guitarist Nick, and Fabien Streit on percussion for all your winter escapist-get-away needs…Opener "Planet of Tribes" brings to mind a primordial dawning of foreign species from a foreign planet coming into evolutionary existence. Kicking into gear and grinding it out in the aftermath is, "Over Me", that rummages and runs through the crunchy wreckage, in an urban setting of situations described in post-scripts. Teddy, Nick and Fabian band together to follow through on the promise of rabble-rousing, accelerating through the arrogance and conceits by incinerating the options of abandonment. Dead Waves surprise you all throughout, with "Anamoly" bringing down new icicle avalanches of an audio assault more brutal than the frozen-over temperatures that loom outside. The song does the classic 'quiet/loud' trick with Teddy's screaming pleas of, "set me free", and the conscious cleanse requests of shouted urgency of, "get off mind". Things get sped up and run the frenetic and direction digging, "Which Way", looking for passage and pacification. Bursting out of the ponds-both big and small, reels the sway and swim of, "Big Fish". Choice moments allow Nick's guitar to ring around the track's water, with Fabian holding up the rhythmic foundation as Teddy's vocals works like a wrecking mallet to destroy and erode all obstacles in the band's path.” - Sjimon Gompers, IMPOSE MAGAZINE

"Throwing it back to the ‘80s lo-fi and noise-rock movements with a sonic punch that recalls the work of the Pixies, Melvins and Bleach-era Nirvana, New York trio Dead Waves embraces the DIY ethos of proto-grunge full force with the release of its sophomore EP" - MAGNET MAGAZINE

“New York trio Dead Waves will release their new EP Take Me Away on the 10th December and it will make the perfect Christmas gift for anyone still lamenting the glory days of grunge, of the Pixies, the Melvins, and Mudhoney. Grab yourself the brilliant and brooding Over Me - distorted disillusionment never sounded so good or so cool!” - THE MAD MACKEREL

"Instead" is the latest single from the Take Me Away EP […] We’re talking about sludgy power chords, howled lyrics, thundering drums and propulsive bass … As I said of the previous single, it kicks major ass. in a way that will likely start up a mosh pit” - William Ruben Helms, THE JOY OF VIOLENT MOVEMENT

"Are you ready to expand your mind?...
DEAD WAVES’ music is like life itself – Heavy, Fragile and Full of Cosmic Pain!" - CVLT Nation